“To the Sundsvall Society of Pipe-layers” 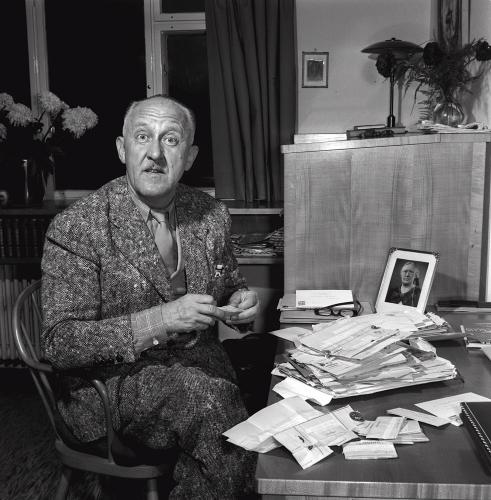 When Halldór Laxness arrived in Stockholm in December 1955 to receive the Nobel Prize for Literature, he was not surprisingly inundated with congratulatory telegrams. Later he described how, while getting changed for a ceremonial dinner in the city, he listened to his assistant reading the telegrams aloud. "All sorts of pillars of culture and education, in the form of institutions and societies, had got in on the act, eminent VIPs and complete nobodies sent their regards, not forgetting the horde of friends, friends of friends and casual acquaintances that a wanderer inevitably picks up over the years on his travels through many countries," Laxness commented.

He wanted to be sure that he wouldn't neglect to thank anyone who deserved an immediate response. In the middle of the reading, he stopped his assistant and asked him to repeat the last telegram. "It was a hearty "lycka til" [ "congratulations"] from the Sundsvall Society of Pipe-Layers - the men who dig the sewers," explained Laxness and continued: "It was gratifying to find that the arbiters of bourgeois life counted themselves among my friends: distinguished colleagues and literary masters, national and international cultural institutions, not to mention the royal family and the banks. But what could thrill the heart like knowing oneself responsible for the fact that men who stand bent double over pipes deep in the ground, trying to get the water to flow through, should suddenly straighten their backs and climb out of their drain in the midst of the winter in Sundsvall in order to shout hurrah for literature? We came to the conclusion that if I could do any man honour with an interim expression of humble gratitude that evening, it should be none other than these men. So only one telegram was sent: To the Sundsvall Society of Pipe-layers."

This little story about Halldór Laxness gives a good indication of his attitude to life. He never forgot where his roots lay - among the common people - and always exalted them in his writing. In his Nobel acceptance speech he asked himself: "What can fame and success give to an author?" And answered: "A measure of material well-being brought about by money? Certainly. But if an Icelandic poet should forget his origin as a man of the people, if he should ever lose his sense of belonging with the humble of the earth, whom my old grandmother taught me to revere, and his duty toward them, then what is the good of fame and prosperity to him?"