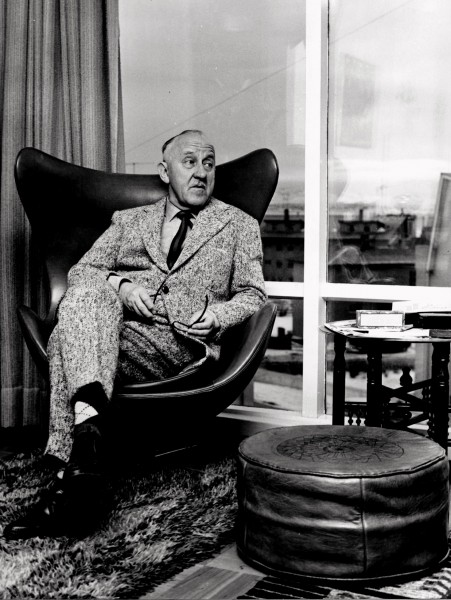 Halldór Laxness (1902-1998) stands head and shoulders above the other Icelandic writers of the 20th century. He was prolific during his long career, writing 13 major novels, five plays and a dramatisation of one of his novels, not to mention his collections of short stories, essays and memoirs. His books have been translated into 43 languages and published in more than 500 editions. His career was unique, the diversity of his works almost without parallel, and with every book he can be said to have approached his readers from a new and unexpected direction.

In the 1920s he wrote a modernist novel with a surrealist overlay, The Great Weaver from Kashmir (1927), as well as progressive poetry, while in the 1930s he wrote social realist novels, including Independent People (1934-35) about the farmer Bjartur of Summerhouses, “the story of a man who sowed his enemy’s field all his life, day and night. Such is the story of the most independent man in the country”, as it says in the book. In the 1940s embarked on historical novels, including Iceland’s Bell, his contribution to Iceland’s campaign for independence, which was published 1943-46. Among other well known works by Laxness are World Light (1937-40), The Atom Station (1948), The Fish Can Sing (1957) and Paradise Reclaimed (1960). Laxness wrote absurdist plays in the 1960s and, 40 years after The Great Weaver from Kashmir and at nearly 70 years old, he began to flirt anew with the modernist in novel, along with a new generation of Icelandic novelists, in Under the Glacier (1968).

Laxness’s ideals and beliefs changed with time, as reflected to a certain extent in his works. He began his writing career as a Catholic, then turned to socialism, but later lost interest in all dogma – except perhaps Taoism. He never attempted to disown the earlier views which he subsequently repudiated, regarding them instead as an instructive part of his psychological development. Yet from the earliest period to the latest it is possible to detect the same basic themes in his books. He looked at things differently from other people, his writings were often barbed, and yet he always managed to see the comic aspects of his characters and their actions. His sympathy was invariably with the underdog.