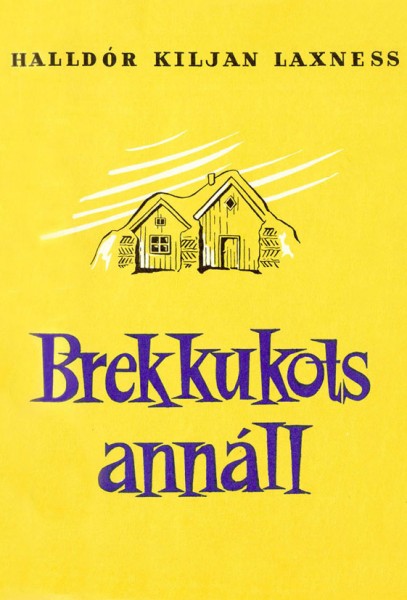 Laxness's ideals and beliefs changed over time, as reflected to a certain extent in his works. Yet from the earliest period to the latest it is possible to detect the same basic themes in his books. He looked at things differently from other people, his writings were often barbed, and yet he always managed to see the comic potential of his characters and their actions. His sympathy was invariably with the underdog. In fact, it could be said that in his works he always promoted "the hidden people", as he called them, by which he did not mean the hidden people or elves of Icelandic folklore, but the ordinary public. It seems fair to say that respect for these people is at the heart of Laxness's work.

Wherever Laxness travelled, he always took along a notebook in which he jotted down his thoughts and things that seemed relevant to whatever he was working on at the time. One such notebook from the 1950s contains a statement of intent with regard to The Fish Can Sing (lit. The Brekkukot Annals), published in 1957, which could in fact be applied to the majority of his works. At the beginning of the notebook the author makes a note of his intention in the novel:

"'The Hidden People', the ordinary 'unspoilt' people - however infinitely frail from the standpoint of moral theology or other codes of ethics - the book is to be a hymn of praise to them, proof that it is precisely these people, the ordinary people, who foster all peaceful human virtues. The main character has his origin in the tranquil depths of the common people, and [the decent people] he meets in his youth have the effect of making all the glory of the world seem hollow on the day when it is offered to him - as a result of the longing he feels to return home and experience once more the tranquil depths of ordinary human existence."

The Fish Can Sing, in other words, pays homage to the ordinary people, who do their work out of simple diligence without boasting about it, a hymn of praise to the common man and the people of whom Laxness was fonder than any others. And, as if to emphasise this, it says a little further on in the notebook:

"Two kinds of Icelanders: the fanatic extroverts, forever banging their drum and showing off, making their mark on the world and ruling the Hype Society - and then the Hidden People ... endowed with almost everything men pride themselves on, but wholly free from self-advertising, although they are the essential backbone, the element which ensured the survival of Iceland's human population, the people who perform all the great deeds but never boast of them, whom one never hears about and who will never be discovered by the Hype Society."

In another place in the notebook he later defines "the Hype Society" as follows: "The Hype Society - the collective responsibility of microscopic local celebrities to praise each other". The Hype Society is, in other words, what has been called elsewhere the Confederacy of Dunces.

The Hidden People - the ordinary men and women - are thus the silent group which is custodian of all the values that matter in the world. So it is not to be wondered at, that Laxness felt it most pressing to thank the labourers of Sundsvall for their congratulatory telegram on the occasion of the Nobel prize-giving, men who stood bent double over their pipes deep in the ground, trying to get the water to flow through, yet suddenly straightened their backs and climbed out of their drain to shout hurrah for literature. To Laxness it was of supreme importance to thank the hidden people for their goodwill.

This respect Laxness showed for ordinary human lives explains probably better than anything else why his works have enjoyed so much popularity among the Icelanders - and among other nations as well. In his books one finds a common human core - a pure note - which appeals to people in the same way wherever they are, regardless of their environment. He succeeded through his works in bringing the greater world into Icelandic literature: in this microcosm the fates of his characters can be understood by readers wherever they may live in the world.