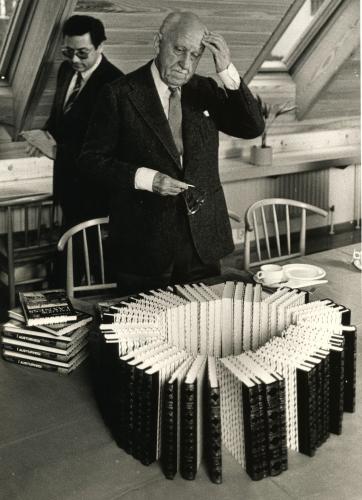 Halldór Laxness's career spanned an incredibly long period from 1919-1987. Throughout this time - almost 70 years - he remained prominent both in Icelandic national life and on the European cultural stage. He produced 62 works in 68 years, that is, nearly a book a year.

Laxness's works have always attracted attention and from the outset the Icelandic nation was split into two camps, for or against him. No one could be indifferent to his books. And whether people agreed with him or not, his writings were invariably taken seriously - they were always important. It is rare to find a writer who has involved himself so wholeheartedly in his nation's destiny, interpreting it through his works at the same time as trying to have an influence on its progress.

Laxness has been described as the last national writer in the Western world. The Icelandic people followed his every move for decades; he was like a father figure to them, at a time when literature was desperately important for the nation's self-image. The Icelanders have always tended to regard themselves as a literary people; the Sagas, written in the Middle Ages, were seen as symbolising the nation's Golden Age and Halldór Laxness was regarded as a worthy successor to the anonymous medieval masters.

He was long considered a controversial figure due to his political views, but after he received the Nobel Prize for Literature in 1955, the whole nation can be said to have united behind him.

Laxness stands head and shoulders above the other Icelandic writers of the 20th century. He was prolific during his long career, writing 13 major novels, five plays and a dramatisation of one of his novels, not to mention his collections of short stories, essays and memoirs. His books have been translated into 43 languages and published in more than 500 editions. His career was unique, the diversity of his works almost without parallel, and with every book he can be said to have approached his readers from a new and unexpected direction.